The U.S. is a country shaped by immigration - but at many times in its history, there has been controversy over new arrivals.

A closer look at those who call the country home reveals the great changes that have taken place and the contribution immigrants make. After a wave of arrivals from Europe in the late 19th Century, immigration fell dramatically - from about one million a year in 1910 to only 165,000 by 1924. This was largely the result of limits on the number of immigrants from particular countries but the economic turmoil of the Great Depression and the two world wars also played a part.

The second half of the 20th Century saw quotas lifted and policies aimed at family reunification introduced. In 1986, an amnesty was granted to many people living in the U.S. without documentation.

Today, the foreign-born population varies widely across the country, ranging from under 5% in parts of the South East and Midwest, to more than 20% in California, Florida, New Jersey, and New York. Although the number of immigrants now arriving in the U.S. is just half the level seen around 1900, the overall foreign-born share of the population is similar.

In the U.S., the rising immigrant share of the population is not simply due to more people arriving but is also due to the falling birth rate among the native population.

Since the 1960s, the average number of children had by women in the U.S. has fallen from 3.7 to 1.8. This has led to a fall in the number of people described as prime working age (those who are 25 to 54) who are the children of native-born parents.

In contrast, the population of immigrants and their children has continued to grow.

The legal status of immigrants Most immigrants to the U.S. are in the country legally.

In 2014, 44% of the foreign-born population had been granted U.S. citizenship. A further 27% are green card holders - making them legal permanent residents - and 4% are temporary residents with authorisation to live in the country.

Roughly one in four immigrants, or 11.1 million people, is living in the country without legal authorisation. This proportion has fallen, following a sharp drop in net unauthorised immigration from about 500,000 per year in the early 2000s to roughly zero since 2009.

About 75% of unauthorised immigrants are thought to have lived in the U.S. for more than 10 years. Fewer than one in five are under the age of 24, with three out of four thought to be 25- to 54-year-olds.

Roughly 800,000 people who entered the U.S. as children have claimed temporary partial legal status. These are the so-called Dreamers, whose legal status has been thrown into question by policy changes introduced by the Trump administration.

Where immigrants come from Today, most immigrants to the U.S. come from Latin America or Asia - a big change from a century ago, when most arrived from Europe.

In 2017, 27% of foreign-born U.S. residents were from Mexico, compared with under 2% in 1910. A further 17% were from other Latin American countries, including El Salvador and Cuba.

Almost one in three immigrants to the U.S. are now from Asian countries, with India and China accounting for the largest share - 6.5% and 4.7% of all immigrants respectively. In 2017, one in 10 immigrants was from Europe, compared with nine out of 10 in 1910.

While the locations have changed, immigrants have tended to come from places poorer than the US, as people seek better circumstances. Output per capita in 1910 in Italy was roughly a third of that in the U.S., as is the case in Mexico today.

One of the clearest ways in which the diversity of immigrants can be seen is in their widely varying educational attainment.

Immigrants are more likely to have a master's degree or doctorate than the children of parents born in the U.S. However, nearly one in four immigrants has not graduated from high school - compared with about one in 20 people born in the U.S. Yet immigrants to the U.S. tend to be more skilled than their peers who do not emigrate

This may be because of the limited social safety net available to those with poor prospects, better prospects for highly skilled immigrants and the relatively high cost of reaching the U.S. for many.

Regardless of the characteristics of their parents, children of immigrants tend to attain educational outcomes that are similar to those of the children of native-born parents.

Immigrants in the economy 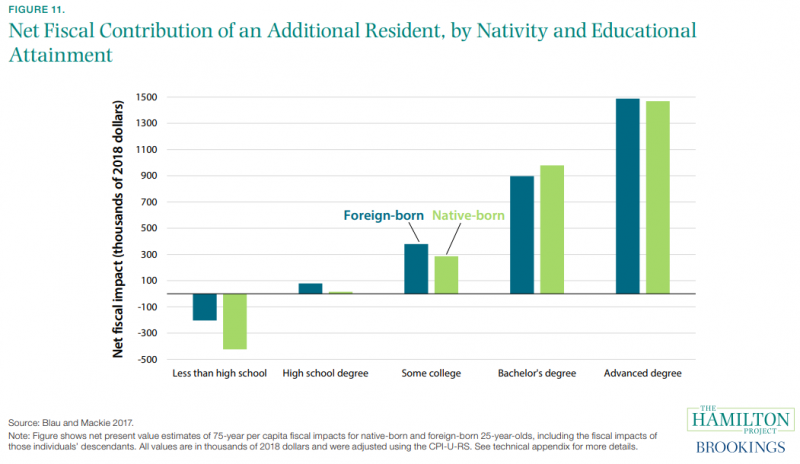 Immigrants contribute directly to economic growth - boosting the population and increasing demand for goods and services.

Giving many unauthorised immigrants citizenship and allowing more immigration would raise annual gross domestic product (GDP) growth - the total value of goods and services produced - by 0.33 percentage points over the next decade, the U.S. Congressional Budget Office has suggested. In contrast, removing unauthorised immigrants would lower growth by 0.27 percentage points a year.

This is significant when it comes to national economic growth. A 10-year $1.5 trillion infrastructure investment might boost GDP by 0.1 to 0.2 percentage points per year.

Although they account for only 18% of workers over the age of 25, immigrants account for 28% of high quality patents - a sign of underlying technological progress, linked to productivity and economic growth.

Output in the economy is higher and grows faster with more immigrants, as they increase the number of workers and productivity.

Immigrant workers accounted for 39% of the increase in science, technology, engineering, and mathematics jobs - rising to 29% of all workers in this sector - in 2010.

Nevertheless, they are most likely to be employed in service occupations, such as chefs, housekeepers and nursing aides.

Immigrants also tend to have a positive impact on U.S. finances - paying more in taxes than they receive in government services, when compared with native-born workers.

It is particularly striking that among low-skilled workers, immigrants are more likely to be employed and less likely to receive government benefits than those born in the U.S.

Since its founding, immigrants have been an integral part of the fabric weaving together the U.S. economy and society writ large.

Understanding who they are and what role they have in the U.S. can help shape the debate around those who make it their home in years to come.