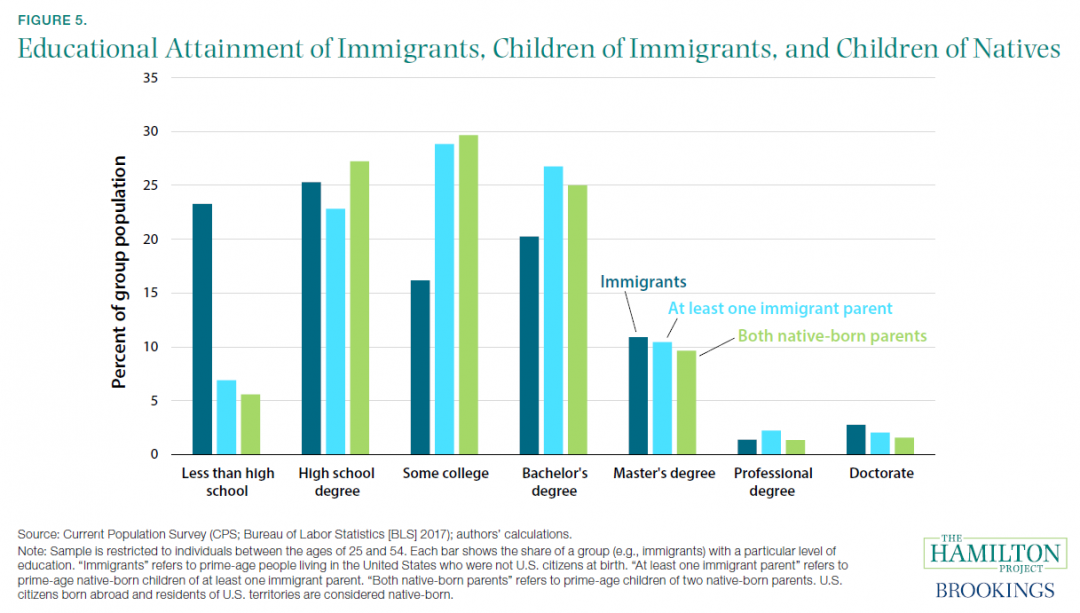 (<< Fact 4: Most immigrants today come from Asia or Latin America, while in 1910 most came from Europe.)

The educational attainment of immigrants is much more variable than that of native-born individuals: there are more immigrants with less than a high school degree, but also more immigrants with a master’s degree or doctorate (relative to children of native-born parents), as shown in figure 5. This reflects the diversity of background that characterizes immigrants. Of all prime-age foreign-born persons in the United States with a postsecondary degree, 58.0 percent are from Asian countries, while 51.2 percent of all prime-age foreign-born persons with a high school degree or less are from Mexico (BLS 2017; authors’ calculations).

Immigrants to the United States are likely more positively selected on education and prospects for labor market success relative to nonimmigrants (Abramitzky and Boustan 2017; Chiswick 1999). This selection may have increased since 2000, with disproportionate growth in the highly educated foreign-born population (Peri 2017). A few features of the United States contribute to this tendency: first, the relatively limited social safety net available to immigrants makes the United States a less attractive destination for those with poor labor market prospects. Second, the United States is characterized by more wage inequality than many alternative destinations, with higher rewards available for high-skilled than for low-skilled workers. Third, the high cost of migration (due in large part to the physical distance separating the United States from most countries of origin) discourages many would-be immigrants who do not expect large labor market returns (Borjas 1999; Clark, Hatton, and Williamson 2007; Fix and Passel 2002).

Regardless of the characteristics of their parents, children of immigrants tend to attain educational outcomes that are like those of natives, but with higher rates of college and postgraduate attainment than observed for children of natives (Chiswick and DebBurman 2004).* For example, figure 5 shows that children of immigrants receive all degrees at roughly the rate of children of native parents, though the former have a slightly higher propensity to have either less than a high school degree or an advanced degree.

(Fact 6: Immigrants are much more likely than others to work in construction or service occupations. >>)