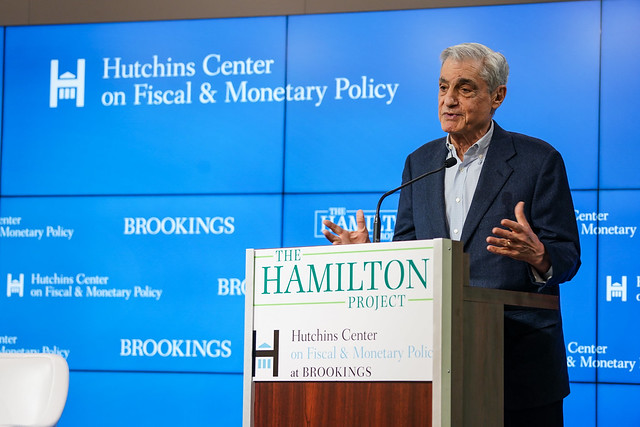 In the United States, COVID-19 triggered a sharp economic downturn. Yet, the ensuing economic recovery was faster and stronger than nearly any forecaster anticipated due in part to the swift, aggressive, sustained, and creative fiscal and monetary policy response in the U.S. While the next recession most likely won’t be triggered by a pandemic, the response can be informed by lessons learned from the COVID-19 recession.

The two-day event coincided with the release of a Hamilton Project and Hutchins Center book, of the same name, that examines and evaluates the breadth of the economic policy response to COVID-19. Chapters address Unemployment Insurance, Economic Impact Payments, loans and grants to businesses, assistance to renters and mortgage holders, aid to state and local governments, policies that targeted children, Federal Reserve policy, and the use of non-traditional data to monitor the economy and guide policy. These chapters provide evidence and lessons to apply to the next recession.

For updates on the event, follow @HamiltonProj on Twitter and joined the conversation using #RecessionRemedies to submit questions for the panelists, or emailed info@hamiltonproject.org.

Brookings requires all staff and visitors to show proof that they are fully vaccinated against COVID-19 via vaccines approved by the FDA or WHO. They may present it in person upon arrival.